Battle Arena is a 5v5 team-based game mode. Teams fight to capture "Mining Points" in order to charge up "The Annihilator". When The Annihilator reaches 100% charge, it fires an orbital strike beam, destroying the enemy team's Protonium Reactor and ending the match. |- | 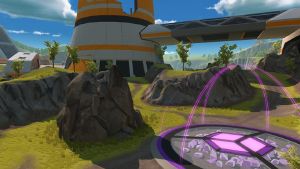 There are three total mining points on each map. Any team's primary objective in the game mode is to capture these points. While your team holds a point, it will slowly charge up your Annihilator, while also providing your Protonium Reactor with a protective shield. The more points a team holds, the faster their Annihilator charges.

The shield (referred to in-game as a 'fusion shield') will heal allies extremely quickly, even if it is disabled. While it is active, enemies inside of it cannot shoot (modules, however, are still usable) and will continuously take damage until they flee. Unless the sheild is shut down, it will behave like a solid wall (litterally just like every other surface in the game) and enemies cannot shoot or pass through it.

If a team holds all three points, the shield around the other team's Protonium Reactor will fall, allowing enemies to steal protonium crystals off of it. These crystals represent the Annihilator's charge. If a team holds 3 points for a while, they will also become "Dominant", meaning they receive Annihilator charge much faster. The shield can be re-instated by simply capturing a mining point.

In order to capture a mining point simply stand on top of it for around half a minute (more teammates on the point will increase charge rate). Getting shot will not slow the capture process, but if an enemy is also standing on the mining point the process will be halted until they either leave or die. At the beginning of the game all mining points are neutral, meaning both teams can capture them.

The capture process has three segments. If you have captured a segment and were then killed, your team will not lose that segment until the point is captured, at which the enemy team can attempt to recapture it again. The capture status of all mining points can be seen either above the mining point as a billboard (a sprite always facing the camera) which can be seen from anywhere, or at the top of the screen, which shows the status of all mining points, your annihilator and your enemy's annihilator. |- | 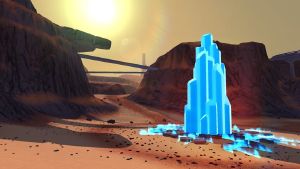 The Protonite Core (aka The Equalizer) is a game mechanic designed to give the losing team a chance to catch up to the other team. It appears as a large crystal stationed at the center of the map. At five minute intervals, the Equaliser will appear for one minute. The losing team's objective is to destroy it, whereas the winning teams objective is to defend it. If the losing team manages to destroy it within this time period, their Annihilator charge will be "equalized" to that of the winning team. This means that the losing team will instantly gain as much power as the enemy team. If it is not destroyed, the crystal will retreat back into the ground, nothing will change, and the game will continue.

In most cases, it is better to ignore the core, unless you are extremely behind and if your team is just beginning to make a comeback (since the enemy will stay ahead if you do not have at least 2 out of three points captured). Furthermore, wasting your time on the Protonite Core, or having everyone after it at once, serves as a distraction from the mining points, therefore sometimes giving the enemy an opportunity to attack. |- |