The items described in this article are obsolete and have been kept for historical purposes. 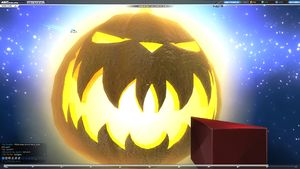 Even mars got dressed up

The Hallowfest is a Halloween festival that began on the 29th of October, 2014. During the Hallowfest, several new cubes became temporarily available in the Tech Tree and Cube Depot, including a large 6-piece mask. A new bot was also added to the roboshop, an interceptor that made use of the new blocks called the T7 Reaper.

The Hallow Chassis Cubes are almost like normal T10 Armored Cubes, but there are a few differences:

In all other ways, they are exactly like T10 Armored Cubes.

These Hallow cubes are almost like normal T8 Aerofoils and Rudders, but there are a few differences: 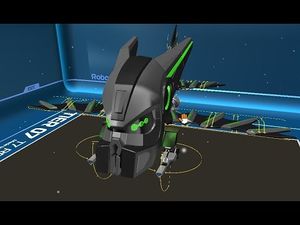 The Hallow Mask, along with other Hallow parts.

The Hallowmask is the very first Robocraft mask. It was first available on the T7 Reaper bot from the roboshop It's actually made up of six different cubes: Left Eyes, Right Eyes, Left Jaw, Right Jaw, Left Horn, and Right Horn. Buying all parts of it costs exactly 4300 GC. Each part has the same stats except for price, listed below: