Hover Blades are a type of movements in Robocraft.

Hover blades, an advanced ducted fan assembly, are used to create a robot that hovers above the ground. Robots that use Hover blades are generally called 'hovercraft' or 'hover'. Hovercraft are less restricted by terrain, such as ice, steep inclines, and harsh pits. While hover blades are ideal for creating highly mobile robot designs, they can be challenging to design and pilot successfully.

Real world hovercraft lift themselves off the ground by inflating a skirt or plenum underneath their chassis with air, while Robocraft hovercraft use hover blades to provide lift and turning forces more like the ducted fans used in many RC drones and small UAVs.

The hover height of Hovercraft is variable and controllable. Hovercraft can ascend up about 30 feet from the ground (enough for most ground based robots) and descend to the ground however they will still move slightly unless a flat base is provided.

An ascending hovercraft will reach a vertical distance from the surface they are travelling over where hover blades no longer produce any thrust at all, this is the operational ceiling.

When a hovercraft exceeds its operational ceiling the loss of thrust means that the hover blades not only stop providing any thrust, they also stop providing lift, attitude control, and are unable to keep the hovercraft level. This causes the hovercraft to shake, shimmy, roll, and/or drift and generally become unresponsive. Having secondary movement systems can help maintain control and stability.

This loss of thrust can be observed when hovering quickly down a steep slope, dropping over a cliff or ledge, skimming over deep dips in the terrain, or when sledding up a steep slope and becoming airborne. 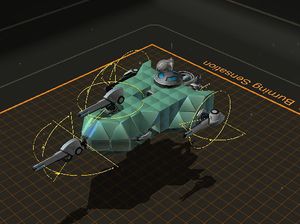 Hover blades need to be balanced around the true Center Of Mass and to provide balanced lift. Different placements on the same blocks can lead to bots with quite different balance and control, so some experimentation is required to make hovercraft usable.

It is often recommended that hover blades be placed as high as possible to prevent flipping over. However, the Robocraft physics model is sufficiently realistic that it does not suffer from the pendulum rocket fallacy, which means that putting hover blades at the top of tall bots could make them more stable.

All hover blades are 1 cube high, and there is no restrictions on cubes placed above and below them, provided they don't extend into the hover blade. 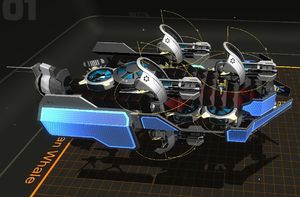 Hoverblades work in combination with other propulsion systems.

While piloting an inverted hovercraft is possible, the inverted steering is a challenge. The following maneuvers may help: