Insect legs are a movements in Robocraft, that allow to climb and jump. 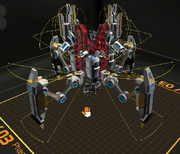 Legs can be placed on the lateral, forward, and back surfaces of a robot.

At least three insect legs are required for stability. The turning center for legs is the point equidistant from all the insect legs placed on a robot.

Insect legs are very large and have a narrow wedge where they obstruct block placement.

Insect legs lift the chassis of a robot high off the ground, allowing space to mount hardware on the belly.

When in flight or flipped, insect legs fold into a stored position on the side of the robot which may block cubes mounted above and below their mounting cube.

Unlike other movement cubes, insect legs do not significantly increase their ground speed with the use of Thrusters. As insect legs embed themselves into almost any surface they make a robot extremely resistant to the thrust of all other movement cubes, as well as collisions. This makes insect legs ideal for landing on steep slopes or uneven terrain, and can stabilize a robot for high accuracy aimed fire. Insect legs enable a robot to scale cliffs and even hang from the underside of things, however this is still a risky maneuver.

Although it is possible to make a robot that can move with only 2 insect legs, the minimum needed for balanced and easy motion is 3 while four is the recommended minimum. Additional insect legs do not affect the motion of the robot across terrain, other than providing additional attachment points and moving the turning center of the robot. More insect legs make a robot less likely to slip or fall when on difficult terrain.

When building a walker designed for climbing, or that is capable of climbing, hanging upside-down (with the aid of downwards thrusters), and getting to those hard to reach places, it's advisable to have insect legs in all four directions, so that a robot has "Frontward Hooks" for going over ridges, and to more easily navigate changing geometry. Lateral (side) insect legs keep a robot stable, making your bot turn, instead of strafe, and having that extra latching/weight carrying capability.

Pressing the SPACE key will cause a walker to jump into the air. The initial impulse provided by the insect legs is greater than what can be delivered by thrusters. While airborne, insect legs have a weak self-righting effect that keeps a robot insect legs-down so that a robot lands on it's feet. Insect legs seem to reduce turning and pitch steering so jumping robots have difficulty changing their course once airborne, however this can be overcome with sufficient wings, rudders and thrusters. Thrusters can significantly increase the height, duration, and distance a legged robot can jump. Jumps are always perpendicular to the surface the insect legs are attached to. That is, a jump off flat ground will go up, where as, if you are clinging to the side of a cliff wall, you will go sideways. If you jump and do not release the SPACE key, your insect legs will stay in a stowed position and will not grip the surface when you land. This option can come in handy for certain maneuvers depending on how you have place any thrusters.

Pressing the SHIFT key will cause a walker to crouch down, how well a robot can crouch depends on how much structure the bot has below the attachment points off its insect legs. A robot can only crouch down until it's lowermost structure collides with the ground (or other surface). Large robots with many widely spaced insect legs can crouch over smaller robots and pin them to the ground.

Walkers can still move whilst crouching, though possibly at a reduced speed. This gives them a smaller profile, allowing them to duck down below rocks or barriers, and can offset the fact that most designs will have taller profiles than most Cruisers, Tanks, and low-flying Hovercraft designs.

When airborne, tipped, flipped, or any other situation where insect legs cannot grab a surface to attach to, they fold up into a stowed position. This can significantly reduce the profile of a robot and makes a legged flyer or jumper a smaller target. Stowed insect legs are easier to roll and tip over when righting, but are still a significant impediment to righting a robot. Careful leg placement can use stowed insect legs to protect more vital components while jumping or airborne. If the SPACEBAR key is pressed and held down without releasing, the walker's insect legs will remain in a stowed position till the SPACEBAR key is released. This can be used to a player's advantage by creating thruster sled/walker hybrids, since stowed insect legs do not impose a speed limit, allowing for the player to travel much faster in a straight line.

Incorrect placement of insect legs can result in a robot that will not turn, move forward, or only scuttle sideways. even with the assistance of other movement cubes. Some experimentation is required when creating a robot based on insect legs, it is advisable to trial in the test robot mode before entering battle. Combining insect legs with other movement cubes can modify the steering behavior of insect legs in ways that make a robot difficult to control.

If an errant walker is in battle the following hints can help: