This article is a stub. You can help Robocraft Wiki by expanding it.

Many maps in Robocraft share a set of common structures between them, this is a list of these structures: 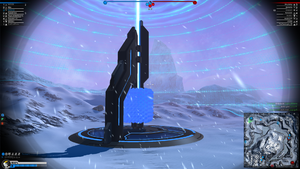 A friendly reactor in full health.

This is the heart of the Fusion battles mode and is surrounded by Protonium crystals. If all the crystals on your own reactor are destroyed, the base explodes spectacularly and the other team wins. The Reactor has four columns of 7 connection points all evenly spaced from each other. 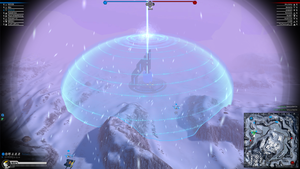 These shields exist in Fusion battles. They surround the fusion reactor and protect it from being attacked by the enemy team, as they cannot shoot through it. You can shoot through your own shield while on either side, enemies cannot shoot into it, only out. This prevents long-range attacks on the Reactor. The enemy's shield is disabled if all 3 Fusion towers are under the control of your team, and vice-versa. While inside your team's shield, all bots receive a constant minor healing effect. The shield will also deactivate if the match lasts for more than 30 minutes, and will not reactivate. 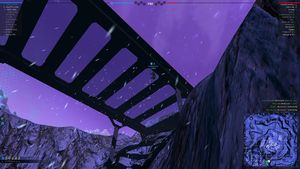 The underside of a bridge.

A bridge is a structure built to span physical obstacles such as a body of water, valley, or road, for the purpose of providing passage over the obstacle.

Bridges in Robocraft are semi-transparent blue structures and have a couple of noted 'features': 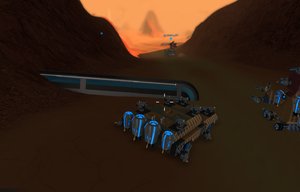 One of the many barricades throughout the map.

A barricade is any object or structure that creates a barrier or obstacle to control, block passage or force the flow of traffic in the desired direction. Barricades are a terrain feature found in Robocraft maps that appear as translucent blue panels embedded in the ground. They can not be driven or fired through, but Hovercraft can ascend to pass over them easily. They provide cover for low profile bots, and can be fired over if a bot has elevated guns that clear the top of the barricade. Barricades can be seen through.

Barriers are marked T57 and are indestructible.