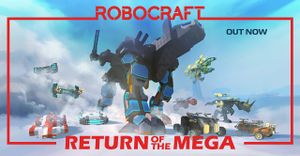 Megabots are robots that have a CPU range from 2001 to 10000, and as such are limited to being in the following gamemodes: Test, Play vs. AI and Custom Games. Megabots, as of their reintroduction into the game, can use any weapon and any module (although prior to the CPU to Damage Boost system being added, large weapons weren't as viable as smaller weapons. To make a Megabot, you must first have a bot of 2000 CPU, when you place another part, exceeding 2000, you will become a Megabot.

Megabots were reintroduced due to being very popular in the time of initial release. Megabots main purpose is for being used to either mess around with friends or used in some way in custom game, although they can have many other uses as well. Megabot will be staying in the game for a while and hopefully we can see them in a brawl event or another game modes some time in the future.