From Robocraft Wiki
(Redirected from Nano-Disruptor)
Jump to: navigation, search

Nanos are short range, healing devices developed from nanotech added in the Rise of the Walkers update. How quickly they heal armor is directly related to the heal rate of the item being healed.

When the nano is shooting allied robots it will regenerate their damaged cubes at speeds relative to the nano's heal rate, the cube's armour value, and the cube's heal ratio. High armour values take longer to repair but a heal ratio of 2.00 makes the cube repair twice as fast. This can be used to totally repair and restore a damaged robot, but can not resurrect near dead players. There seems to be no pattern in the order in which cubes are restored. Lost cubes are only replaced once the entirety of the missing cube's health has been restored to the bot; causing the repair process to appear to hang momentarily (not lag), then jump by a large margin as the high health block spawns in.

Nanos have a lock-on feature similar to the one of the Proto-Seeker, aiming in the general direction of an ally will cause the weapon to lock on the target, using right mouse button will shoot a barrage of particles that will fly towards the target trying to follow him if it where to be moving, particles that miss and touch a surface will dissapear.

Nanos do not seem to have any recoil on the robot they are mounted on, but they do seem to gently push the bot being targeted, usually only seen when the target is on ice.

Nano Disruptors in use.

Ambulances generally stay far away from the battle, instead focus on quickly reaching damaged allies and repairing them to full health. Allies may choose to leave before they are full health, usually because they have reached a point where they have enough guns and movement to kill the enemy again; in such cases choose to move on, follow to finish the repairs while moving, or search for a new patient. 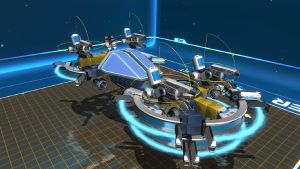 A good amount of medics will use teslas on their bot, since both devices gain from a fast design. The general tactic is you stay with your team or a partner and wait for them to cripple the enemy and then you come in with the teslas and finish the enemy. This is a good tag-team strategy that can be very deadly.

This strategy involves staying with a high damage output or tanky ally, and repairing them while they are fighting. This can be really effective in a platoon, and makes the target much more resilient. This also grants them a morale bonus, often leading to them taking the fight to the enemy, and being much more willing to do the brave thing and win the battle. Care should be taken in this strategy, however, as this will often lead you deep into enemy territory with little to no reinforcements.

Often medic robots will cluster together and repair each other while waiting for other robots to come and use their "healing aura" to restore their weary frames. However, more than likely the medics will selfishly auto-target the closest robot rather than use aimed fire to rapidly repair incoming patients. This can be useful, as a group of medics can ensure they survive and maintain maximum repairing efficiency, but can result in the whole group being destroyed if clustered too closely together while not paying attention to enemy movement.

Since Maximum Loadout Update some players choose to adds one or two nanos at hard to reach and resilient mounts so they still are able to support nearby allies even in case they lost all their main weapons. 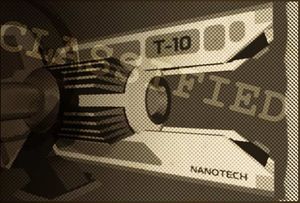 The photo from the third Robonews newspaper.