The Rail Cannon , also commonly called the railgun, is a type of weapons in Robocraft. The Rail Cannon fires extremely fast projectile shots that deal heavy damage in a penetrative sort of fashion.

Rail Cannons are the long range weaponry of Robocraft. Being the most accurate when on the ground, they deal high amounts of damage to specifically targeted areas on enemy robots. Rail Cannons are unique in that they have the best zoom enhancement and have a penetration mechanic, where the projectile will deal a third of it's damage for up to three layers of blocks, splitting the damage evenly and creating large holes in enemy robots.

While Rail Cannons have high long range capabilities, they are easily outclassed by many other weapons when in close quarters combat, thus require careful positioning and timing to remain effective on the battlefield. 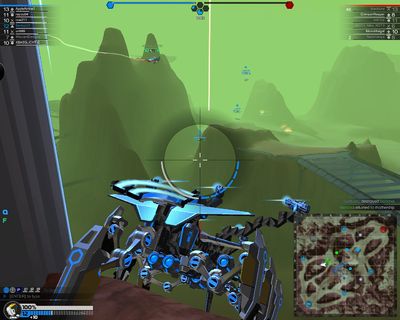 A nice place to snipe.

Rail Cannons are the long range weapon of the game, and remain effective when kept at a distance from your opponents. Their high accuracy and large damage per shot make them ideal for crippling opponents and taking off large components of enemy robots. This high damage per shot is compensated by a very slow rate of fire when compared to other weapons. However, don't let this slow rate of fire put you off, as the larger Rail Cannons excel at long range burst damage, allowing you to successfully put in a large amount of damage which will render your opponent crippled and unable to retaliate due to your superior range capabilities.

One trick with Rail Cannons is to aim for the centre of the enemy bot and repeatedly strike there. With enough shots, this will 'split' the robot and reduce their health by at least half, which will either heavily cripple or kill them.

Another trick is to aim for enemy weakpoints, places where a single precision shot can chop off large segments of an enemy bot. Most well-built bots will not have many of these, but fliers tend to be littered with them.

Be aware of your surroundings when attacking from long range, as rails, while they can keep an enemy pinned, will also tempt other opponents to come around and flank, thus getting the jump on you and most of the time winning the engagement. Do not tunnel vision on one segment and remain immobile for the whole game, an effective Rail Cannon user will support the team and will know when it is time to reposition.

Know the best locations on each map. While map knowledge is important, it is crucial for a Rail Cannon user to know what points will give them an advantage over their enemy.

Large Health/Tanky Robots: As previously stated, it is effective to aim for the centre of the robot and repeatedly strike the same spot to split components indirectly from the robot. This will allow for a large segment of the robot to simply fall off which will render the enemy tank much less mobile and healthy.

Flying Robots: Rails are almost ideal for taking down flying robots, due to a flying robots relatively more frail design when compared to beefier ground units. Aiming for critical components on a flying robot will help disable it from action and cause the robot to come tumbling to the ground.

Enemy Snipers: A competent enemy Rail Cannon user will be able to keep you pinned and take large portions off of your robot before you can. One simple strategy is to reposition and fire at their flanks. This will allow you to get the first, and most crucial shot, off, allowing for a much less risky scenario for you.

Agile Ground Units: Agile ground units, such as sprinters or hovers, can be a nuisance due to their agility which can make them hard to target. Keeping at a comfortable range is ideal, as they will have the upper hand in a close range engagement and can easily cripple you and finish you off well before you can dispatch them efficiently. When you notice that they may be on the prowl and coming after you, try and hit critical movement points to slow them down, or try and deal as much damage to them as possible.

Rail guns became the weakest gun type in the game after their nerfs. While their strategy has certain strengths like long-distance low risk damage, they are made relatively weak by their long reload time, large gun footprint, low DPS, and stable base requirement which make rail tanks extremely vulnerable.

After the latest buffs and changes the rail gun in now on par with the other guns but needs a lot of practice and knowledge about bots in general. A skilled sniper must know where the weak spots are, even though every bot looks different. In the hands of an unexperienced player this gun is by far the weakest.

Before the Electromania Update, Rail guns had to reload after respawning in Battle Mode, which made them very weak in defending the base after they respawned.

In the past when fully rails were depleted of shots, Rail Cannons reloaded simultaneously in 12 seconds, regardless of amount. Manually reloading (initiated by pressing R) a single cannon takes 6 seconds. No cannon may fire until reloading is complete, even if some are already loaded.

Prior to the Dawn of the Megabots update of the 30th of April, 2015, it was possible to hold down the fire button and unload all loaded rail cannons within a very short time, albeit at greatly reduced accuracy. This allowed for a non-sniping approach to rail use where the user sneaks up close on targets, and fires rapidly at close range in an attempt to kill the target in a single strike. Failing that, the shooter will retreat, as even without a kill this technique will severely cripple most enemy craft. This could be surprisingly effective since the total damage 6 rails can deliver will often be sufficient to punch straight through even the strongest armor if they hit close together.

Assuming the use of 6 rail guns, the total time needed to fire all 6 shots can be calculated as follows: