Rotor Blades, also known as Rotors, are a movements in Robocraft released 18/02/2015 as a part of the Dawn of the Megabots (DOTM) update. They are used to create helicopter-style robots.

Helicopters can essentially be treated as higher-altitude Hovercraft, with similar maneuverability and speed. They're much more easily controlled than regular thruster/wing aircraft, but also slower. Helicopters work best as ambushers but also make great medics as they can quickly cross the battlefield to repair damaged teammates or escape from a dangerous situation. They require battlefield awareness as enemy lasers and railgunners can destroy rotors quickly. Due to rotor's weight restrictions, many helicopter designs will be crafted with few blocks or heavily electroplated for defense. Many builds opt for a greater number of rotors and upward facing thrusters to circumvent the limitation, allowing for immensely tanky helicopters. Unlike real helicopters, robocraft Rotor Blades don't generate torque on their own, hence a tail rotor is not needed to keep a helicopter stable.

In addition, whenever they generate lift, Rotor Blades also generate turbulence, bobbing the helicopter up and down gradually. This will disrupt Rail Cannon aim unless meticulously counteracted, and can throw off aim of other weapons too.

In terms of armaments, Helicopters can effectively field anything short of railguns (as the blades constantly and slowly move up and down, causing railguns to lose accuracy). Plasma and Laser helicopters are particularly effective, though the latter is very risky as it often involves getting within range of enemy Lasers as well.

Rotors have diminishing lift returns after 4 rotors placed. Additionally, if more than 8 rotors are placed on a bot then they will produce the same lift as 8 rotors. 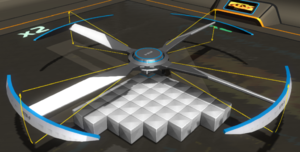 Due to the tilting of the rotor this is the furthest out you can put armour cubes flush with the base of the rotor.