From Robocraft Wiki
(Redirected from SMG)
Jump to: navigation, search

The Laser is a type of weapons in Robocraft.

Lasers are a weapon cube that fire a particle/laser bolt, dealing damage upon direct impact. Individual Lasers have a low rate of fire, but with additional Lasers, the firing rate can be increased. Nominal count for Lasers Wasp, Hornet, Blaster, Vaporizer, and Disintegrator is 4 guns, while the nominal count for Laser Leviathan is one.

Holding LMB fires a continuous stream of lasers, which allows for maximum damage output over a large area, but also increases the size of the reticle, resulting in a large decrease of accuracy. Pinpoint accuracy with Lasers can be achieved through tap-firing, which is holding LMB in short increments, allowing shots be fired with less stray from your target. Pinpoint tap-firing is useful for harassment of enemies at long distances to weaken them prior to engagement, or to snipe off critical parts (armoring, weapons, movement parts, etc.) in close-mid combat.

Lasers are available in front-mount and top-mount variants, both of which are identical in stats but different in hit boxes and firing directions. Front-mounts are only capable of firing in one general direction, while top-mounts are able to rotate full circle.

How to Use[edit | edit source]

Aside from knowing when to use single-shots and when to use full bursts, Lasers are already very intuitive. Lasers shine in one-on-one combat. Against other Lasers, it is a matter of whose robot has more guns, and the ability of the player to target weak areas. The most common strategy using the Lasers is to target the opponents weapons, then the movement parts, and finally the center of their robot. This strategy is based on trying to cripple the opponent's robot as fast as possible which allows you to easily finish them off.

Tanks
Lasers are not considered the best option against bulky bots such as tanks. However, they can be used in conjunction with teammates to finish off weakened opponents, take out critical parts, or help lower TTK (Time to kill) of Tank/Bulk robots.

Flyers
Lasers do well when used as AA (Anti Air), yet are not as effective as rails or Aero Flaks. Nonetheless, they provide great suppressive fire against them.

Plasma Bots
When fighting someone with plasma cannons you want to take off as many cannons as you can. This has always been true but even more so with the round robin firing system of 2017. Lasers have a great advantage over most other weapons as they use the very little energy unlike Plasmas. (example: Laser Wasp (lowest level) uses 16 Energy per shot. but Plasma Pulse (lowest level) uses 168 energy per shot.)

Railgun Bots
Rails crush Lasers in damage output but have a far slower Fire rate. As such, they have a similar DPS to lasers but are best for long range action. Thus, Lasers can be used effectively against rails only if they can accurately de-gun them at close combat. Success against rails from far distance is very unlikely.

Nano Bots (Healers)
As Nanos do not provide damage to enemies, Lasers provide a fine counter to them, but don't shine spectacularly in denying healers and support. However, as stated before, they can be effectively used to suppress healers from trying to repair opponents.

Tesla Bots
Lasers are the best option for facing tesla bots head on as their high DPS and accuracy allows them to disarm most tesla blades immediately. As most tesla bots are fast and agile, this makes lasers an even more attractive choice for countering these bots. Tesla bots are extremely dangerous and should never be given a chance to impart their incredible damage upon you or an ally.

Lasers
When facing another laser bot, it mostly comes down to disarming the bot faster than they do to you.

How to Counter[edit | edit source]

For one-on-one encounters with other Lasers, a known tactic could be aiming directly at their guns to minimize their DPS and firepower dramatically. Lasers also have good ambush potential, with the sustained fire often leaving the victim in a panicked state, especially when engaging other craft from a distance 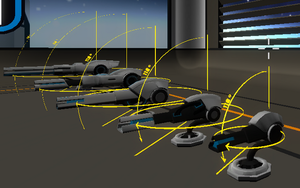 SMG prior to MegaBot Count Down 3 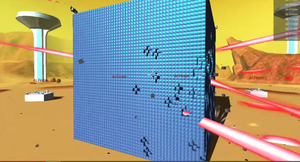