The Tesla Blades are fixed, electrified quarter circles with a mounting point in the middle, that is used for ramming. Multiple blades used at once can be extremely effective. Tesla blades are the only melee weapons in Robocraft thus far. 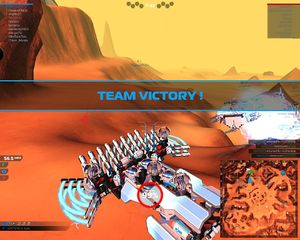 An old-style Tesla Lawnmower earning 7 kills in the aftermath of a skirmish. 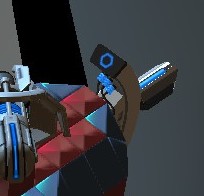 Before the match starts, they are closed. 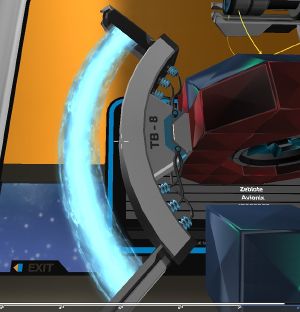 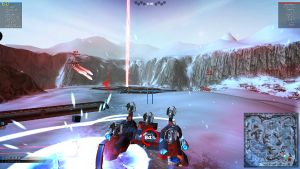 The massive blast from a successful hit.

The Tesla Blades deal massive damage. Tesla Slicers do 58,918 damage, Tesla Rippers do 71,543, and Tesla Novas do 84,168 damage, all with max fire rate which is 6.67 per second. In comparison with railguns, which are regarded as "the sniper of Robocraft", only do 66,774 to 102,767 per second below legendary rarity, not to mention that the Max Fire Rate Count of Tesla Blades is 2 while its 4 for railguns below legendary rarity. Although these Tesla blades deal enormous amounts of damage, they are manually selected and do no stack effectively.

If you are planning on ramming, be sure to avoid Proto-Seekers and Ion Cannons as they can destroy your Teslas before you close the distance to them. If you are up against a bot armed with Lasers, shoot off most of the guns at range, then follow up with the teslas for a finisher. Otherwise just charge, because other weapons have a long reload time.

Mounting Blades both vertically and horizontally can massively increase the ease of ramming.

As a general rule, if your main weapons are Teslas, you should employ a ninja strategy -- always stay under the radar and sneak around and hit from behind. Abundance of Thrusters, Blink and Ghost modules are very welcome. High speeds are crucial due to an enemy's difficulty in seeing and shooting a fast-moving target. In addition, it is substantially easier to hit targets and run away when in a speedy craft.

There are many quick ways to counter ram-bots. Always remain aware of your surroundings. Check your flanks once in a while and avoid getting "tunnel vision"; focusing on one threat at a time will end up badly. This is especially true when facing off a platoon. They may be communicating to each other and suggesting an ambush from behind.

Most tesla rammers are seen on the ground, though there are drone varieties that fly. So, you guessed it, watch your flanks and the sky.

If a player is equipped with walker legs, they can jump just before the tesla rammer reaches them to avoid being hit. Even simply using hovers can give an edge against most sled tesla bots. Because of their fragility, the player should be able to shoot of most of them before the enemy hits them.

Un-intuitively, moving toward a tesla bot above you will often bring you to safety. No one believes that you would jump toward their knife so they most likely prepare for you to move out of the way and may miss their mark as a result.

Plasma launchers are probably the second best, if not for their fatal splash damage that knocks off more blades than lasers per shot. Generally, aim for the center and drill through it in order to disable the tesla bot. Be aware however, that plasma launchers eat through your power, leaving you vulnerable if you miss.

Rails are the worst-case scenario against tesla bots. Provided that they have a clear shot and several bullets, they will be able to damage an attacking tesla bot. However, most tesla bots will rely on stealth, and the realization of an attacking lawnmower may be too late for a Railer. The player can make use of walker legs in order to jump above the blades, as well as to counter them in a hopefully quick manner. But do watch out! Some tesla are very maneuverable and may be able to turn around and be ready for another attempt before you even land.

The Ion Distorter is effective at blasting out large sections of blades. Unfortunately this does rely on the tesla bot getting dangerously close, and the distorter's cool down time is fairly slow, which means that missing can lead to the IND being destroyed due to its easy-to-hit nature.