Wheels are a type of movements in Robocraft. 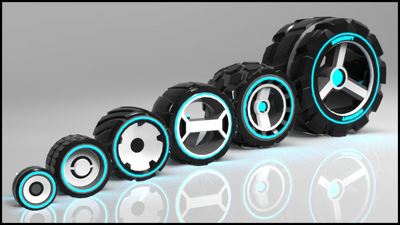 Wheels are the most inexpensive mode of transport for robots, in terms of Robits costs and CPU usage, and are the first type of movement cube available to players. Steering wheels have the added benefit of allowing robots to change direction. There is no difference in stats between steering and regular wheels.

Wheels that are carrying too much mass will overload, allowing only minimal propulsion and steering capability. Load capacities improve with level progression.

On a smaller wheeled craft, oversteering can cause a big problem if all of your wheels are steering wheels. The opposite can be said about a very large wheeled craft. A solution to this is to add fewer or more steering wheels respectively, to increase/decrease turning speed to a suitable level.

Wheeled bots are prone to flipping over, and it is recommended that they are placed so that they have a somewhat wide wheelbase.

Wheels are very much affected by the weight of the bot (mentioned above), and by the terrain. Wheels lose grip going up steep hills, bumpy terrain, or over ice. Wheels are also not very tanky, and it would be advisable to have redundant wheels or shield them using electroplates or blocks.

Electroplates placed on the front of a craft can also clip against the ground, causing you to get caught on terrain. Moving the plate upwards one or two blocks generally fixes it.